NUM LOCK BUTTON ON THE KEYBOARD – USE AND SETTING

A computer keyboard , regardless of whether it is standard (like in laptops) or portable, has a lot of keys that users rarely or never use, in contrast to the central alphabetic and numeric block and the buttons “Enter”, “Shift” and Esc. But, despite the lack of well-deserved popularity, most of the additional keys have great potential and considerable benefit. For example, the disliked “Win” button (Microsoft icon, usually located between “Ctrl” and “Alt”) allows you to simplify the launch of most services, utilities, programs, due to the huge number of “hot combinations”. 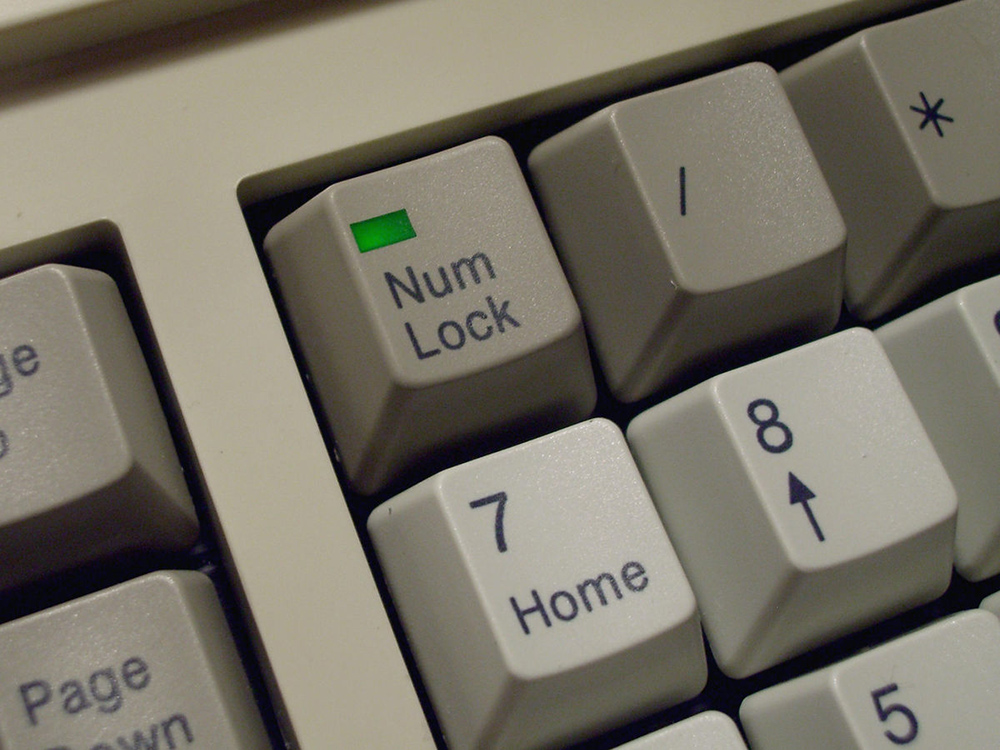 This article will focus on an equally useful key called “Num Lock”.

Num Lock key: what is it on the keyboard

“Num Lock” (full name – “Numbers Lock”) literally means “lock numbers”. In fact, it can either disable or enable the use of the numeric keypad located on the right side. The button itself, in most cases, is located in the upper left corner in the block with the numeric keypad. Its neighbors are the “/” and “*” keys. In fact, the functionality of the button in question is contained in only one action – this is to enable / disable the numeric keypad operation mode. For clarity, we will demonstrate the influence of “Num Lock” on the operation of the keys of the digital block in the form of a table:

The rest of the keys of the digital block do not change their functions when switching “Num Lock”.

Few people know why the “Num Lock” button is needed yet. It turns out that the numeric keyboard in Windows can be used as a substitute for a mouse or touchpad. To activate this mode, you must simultaneously press three keys: “Left Alt” + “Left Shift” + “Num Lock”, a window will appear in which you need to confirm the switch. You can return to normal mode using the same key combination.

The Windows operating system assumes the ability to activate the numeric keypad immediately at the start of the operating system, without manually pressing the key in question. True, this will require small changes in the registry, so first create a restore point and then do the following:

After these manipulations, the “Numbers Lock” activity indicator will automatically light up after the operating system boots.

However, you can enable or disable key activation through the BIOS. True, not all manufacturers support this feature. But where it is implemented, it is better to immediately enable “Num Lock” when booting Windows 10/8/7, if you use the numeric keypad primarily for entering numbers.

Note that most of the keys in this block are duplicated in both modes. But if the cursor keys are located separately and ergonomically, then the numbers are not so simple – they have a separate row above the letters, and this is far from so convenient. That is why most users prefer to use the number pad to enter numbers, which is what makes the “Num Lock” key in the activated state. On full-fledged keyboards this is reminded by a burning light located above this button.

Non-standard keyboards should be understood as notebook / netbook keyboards, where a separate numeric block may be absent, as well as on shortened keyboards, which are purchased in case of an acute shortage of workspace. Although the “Num Lock” key is also present here, switching between modes can be done with the “Fn” + “NumLock” key combination, but not always – on some laptop models a different key combination can be used. Finally, we note that if there is no digital block on the keyboard, the digital mode is activated, but instead of the cursor keys, the buttons located on the main (alphabetic) part are used.

Usually the numbers 4, 5, 6 are obtained by pressing the letters U, I, O, numbers 1, 2, 3 – by the letters J, K, L, respectively. And if, while typing, you find that numbers are popping up instead of letters, then you accidentally pressed the “Num Lock” key.